Disclaimer: I’m promoting the Detroit International Half Marathon as part of being a BibRave Pro. Learn more about becoming a BibRave Pro (ambassador), and check out BibRave.com to find and write race reviews!

Detroit International Half Marathon:  Wake up early, run to Canada via the Ambassador Bridge and then back to the United States through the tunnel all in 13.1 miles. 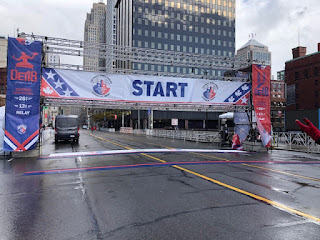 On Sunday, October 21st, I had the opportunity to run the Detroit International Half Marathon.  I had such a wonderful time, last year, that I knew that I had to run this race again this year.  So when registration was available, I registered immediately.  Little did I know, then, that I would become a BibRave Pro and have a discount code to offer others to save on the registration.  Regardless, the registration was worth every penny.

Because of my parking concerns, I spent the Saturday night before the race at the Motor City Casino.  The hotel is nice and approximate 1.5 miles away from the start.  The hotel has plenty of food options and easy self-parking.  A shuttle is offered to the start line and back to the hotel, after the race.

As a BibRave Pro, I was given a behind the scenes tour with Barbara Bennage, Executive Race Director.  It was a crazy busy time for Barbara, but she was able to share information about the thousands of dollars that are spent on port-a-potties, security and to vendors to put the race on.  Also, the thousand of hours of work that is put into covering parking meters, setting up banners, packing finisher bags with snacks and planning the race. 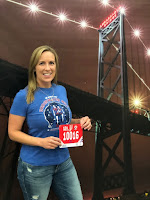 The race was everything I expected it to be.

At approximately mile marker two, runners approach the Ambassador Bridge to cross into Canada.  After five miles, runners enter the tunnel to return to the United States.  After a run through Mexican Town and Corktown, runners cross the beautiful finish at Fort Street and Cass Avenue.

After completion, runners are given their medal a bottle of water and, my favorite, chocolate milk.  After moving further away from the finish, participants receive a bag full of fuel (including a banana, cookies and a cup of fruit). 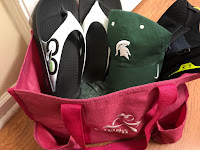 Getting back to my hotel was a little more difficult, this year, as I was unable to locate the shuttle, which was supposed to pick up every fifteen minutes.  I ended up walking a little over a mile back to the Motor City Casino.  Took a quick shower, checked out and was on my way home, while relaxing my Oofos.

My next half marathon will be the Madison Half on November 11, 2018.  If you are interested in joining, use MMRAVE18 to save on registration.  I am looking forward to cool air and sunny skies in beautiful Wisconsin. 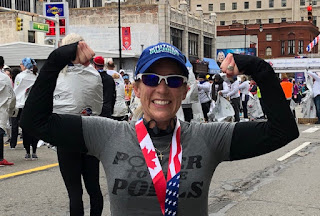