I have had the opportunity to test Shady Rays before.  In fact, I raved about them last year, in my blog.  Unfortunately, my spouse also loved the sunglasses and, since I had selected a neutral color, one that he also liked, he decided that those glasses needed to be his.

When I was presented with the opportunity to test the new Shady Rays Allure Series, I could not sign up quick enough!  *Especially since the spouse now has possession of my old Shady Rays. 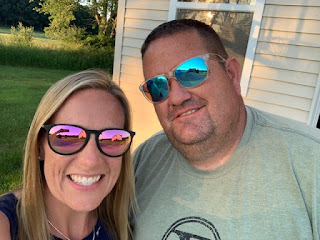 The Allure Series have lightweight round lenses with brushed metal accents and, best of all, are thin behind the ears, so they work better with my AfterShokz than the Signature Series as there is only so much room behind my ear.

The lenses are Polaized with rainbow mirror and 100% UV protection and shatter-resistant.  And, just in case, the Shady Rays return policy is very generous, even free lost or stolen replacements.

I am a big fan of these glasses and have been wearing them non-stop (except the weekend that I forgot them at home).  Surprisingly, they are priced quite reasonably at $45 and if you use the discount code BIBRAVE you will receive 50% off your second pair from the Shade Shop.
at July 30, 2019 No comments:


Disclaimer: I received coaching from Endure Strong as part of being a BibRave Pro. Learn more about becoming a BibRave Pro (ambassador), and check out BibRave.com to review, find, and write race reviews.

If you have followed my running at all, you know that I struggle with consistency and putting the weekly miles, so when I had the opportunity to work with a coach, I figured why not.  Thinking that being accountable to someone would help me get weekday runs and workouts in.  Turns out it does...a little.  The daily emails with scheduled runs and workouts was a nice reminder to lace up.

Who is the coach?  Just U.S. Olympian  Jared Ward.  Jared is a busy human:  Professor, assistant cross country coach at BYU, dad and husband, you get the idea.  So he understands the juggling it takes to take care of our minds and bodies.  As the online coach for Endure Strong, he provides training plans, suggestions and responds to questions.  Team Manger Andrew Webb sends weekly emails to remind members of upcoming team calls and other helpful information. 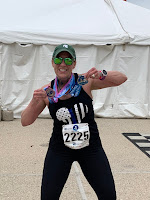 It was easy to set up my account on my laptop.  I was even able to figure out Zones, by putting in my April 14, 2019 Gazelle Girl Half Marathon results with the Endurance Nation Run Pace.  Apparently, there is an "Easy" Zone and a "Very Hard"

I introduced myself to the team on the social wall and I was officially up and going!

I was pleasantly surprised that every morning, I received an email with my daily workout.  Unfortunately, since I injured myself, the workouts had not been consistently accomplished, but with the informative blogs and podcasts, I was able to learn, while recovering.

The Wednesday night team video chats were educational and inspiring.  Even when my home wifi went down, I was able to watch the video chat the next day, while at a local coffee shop.

Logging my activity was difficult to remember, but easy to accomplish.  Funny thing is that I could not have been the only one, since Team Manager Andrew set up "Journaling" as the Challenge of the Week around the same time that I was struggling to remember.

My goal race was the MISH Waterfront Half Marathon in Gladstone, Michigan.  From my understanding, this was the second year of the race.  This year's race was well organized with plenty of water stations, which were well staffed, ample parking and plenty of restroom options, and a very scenic route.

Unfortunately, my pace was not where I wanted it, for this race.  I do not blame anyone but myself as even though I had an amazing coach and great support system, I failed to stick to the training plan.  I can come up with so many excuses, but that is exactly what they will be:  Excuses.  I injured my lower right leg, which held me back.  I had work, family, etc obligations, which limited my ability to log the miles.  You name it and I can fault it.  Truth is, however, that I still struggle with consistency. 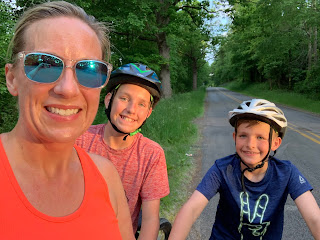 Coach Ward and the daily emails were awesome.  The weekly calls were inspirational.  In order for me to reach my running goals, I have to set aside all of my excuses and log the miles.  I need to stop running 13.1 miles each month, without properly training as I know that is a recipe for slow times and injury.

If you are interested in getting serious about your race times and taking on a coach, I would certainly suggest Coach Jared Ward and Endure Strong.