Disclaimer: I received a free entry to the Bellin Women's Half Marathon as part of being a BibRave Pro. Learn more about becoming a BibRave Pro (ambassador), and check out BibRave.com to review, find and write race reviews. 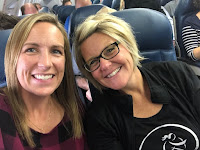 A few months back, I convinced a girlfriend to run the Bellin Women’s Half Marathon as her first half marathon.  She agreed and accompanied me to Green Bay, Wisconsin from Detroit, Michigan this past Friday afternoon.  The flight was quick and we were able to check-in to our hotel immediately upon arrival.

Packet Pick Up was a breeze and trading for a larger hoodie was simple.  There were opportunities to sample products, buy last minute running necessities (including shoes, socks and headbands) and an area to make encouraging signs.  The packet pick-up bag was a one-of-a-kind design that also served as the gear check bag for those that needed dry and warmer clothes at the finish. 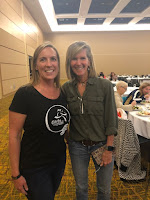 The pasta dinner was crazy empowering as the keynote speaker was Molly Barker, Founder of Girls on the Run.  Other speakers included Chris Woleske, President and CEO of Bellin Health, and Linda Maxwell Race Director, who were so encouraging.

The race started in front of the Hyatt Regency Green Bay, less than a block from the KI Convention Center and immediately took runners up a bridge (not too bad of an incline) and across the Fox River.  Runners then ran down Broadway, which seemed to be pretty industrial, but the reward came around mile seven, when we crossed the Fox River again and started running on the Fox River Trail.  The race was well supported by groups such as Girls on the Run and there were a few different radio stations that provided much needed spirit at certain mile markers.  I was pleasantly surprised by the number of spectators and supporters (most of which seemed to be husbands, boyfriends, sons, brothers and children). 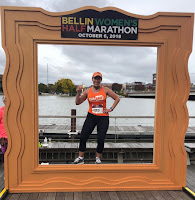 Before crossing the finish line, I had the opportunity to run by the Race Director Linda Maxwell and thank her for putting on a great event and that was before I even experienced the finish party!  Talk about a way to celebrate an accomplishment:  Non-alcoholic champagne, chocolate milk, water, salad pitas, cookies, strawberry shortcake and chocolate all included for finishers!  Wow!  There was even a great set up for pictures, which was much nicer than the regular simple backdrop banner. 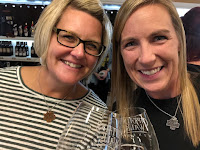 For use after the race, an injury hotline Bellin Women’s Half Marathon Injury Hotline.

Overall, I am so thankful that this was my friend’s first half marathon race as I believe she experienced everything that a half marathon should be and she rocked it.

The theme of this year’s Bellin Women’s Half was determined and I am determined to have other runners join me in this healthy adventure towards making new friends and burning more calories.

I encourage you to mark your calendar for a trip to Green Bay, WI for October 5, 2019! 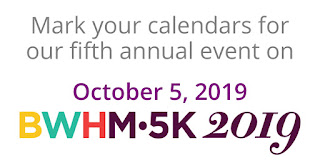